I love my Kindle Fire, with one big exception: It does not support proxy servers. I use my fire in environments all the time (i.e. public schools) that require proxy support. While I haven’t solved the proxy problem system-wide, I have figured out a way to use Opera Mobile to add a proxy-supporting browser!

Even though the steps below WILL NOT add proxy support to apps for the Kindle Fire, it IS possible to have a full-featured browser (Opera Mobile) on your Kindle Fire that supports proxies. Since Amazon won’t let you install Opera through it’s app store, here’s what you can do to install it and get it ready for proxies:

Now when you go to a page in Opera, you will be prompted to enter your Username and Password (for authenticated proxies). As I said earlier, this does not solve the problem with apps that need proxy support, but at least you can use a browser with proxies using this method.

I work with file paths a lot, since I email co-workers locations to stuff on our file servers. And even though I try to avoid it, sometimes it’s absolutely necessary to hard-code a file path into a program or script. In either of these cases, the quicker I can get the path to a file, the better. In the past, I had always used a registry hack or script to add the ability to copy a path from a context menu. Hacking the registry is not a big deal, but wouldn’t it be nice if any Windows computer could have this functionality out of the box?

Little did I know that Windows 7 and Windows Vista have the built-in capability to copy a file path by simply holding shift and right-clicking on the file for which you want the path! In the resulting context menu, the magical phrase Copy Path becomes visible! Clicking it puts the absolute path to the file on the clipboard. It works on both local and remote files.

Much to the chagrin of my lovely wife, I love the clickety-clack of mechanical keyboards. What is a mechanical keyboard?  For anyone who learned to type from 1980 to around 1996, you should be able to remember the old IBM Model 80 keyboard that sounded a lot like popcorn popping as you typed. The endearing sound made by the Model 80 is a result of buckling springs that actually contract and spring forward each time you press a key. I was lucky enough to find three Model 80s and used one (that required a lot of clean up) for about 6 months. It is a joy to use and takes me back to my genesis with computers. The only problem is that it doesn’t have a Windows key. For most people, that’s no big deal, but I use it all the time. I thought I could live without it, but after about the 3rd month of using the Model 80, I started looking for a more modern solution.

After a great deal of deliberation, I added the iOne XArmor U9 Plus Keyboard to my Christmas wishlist. It features technologies that are a more modern take on the Model M:

While still clicky, it’s not nearly as loud as the Model M (much to Beck’s enjoyment). The keys are also not as hard to press. So far I have thoroughly enjoyed using it and would recommend it to anyone who misses the feel of a real, mechanical keyboard under his or her fingers.

If you want to learn about the many different types of keyboard switches, check out the Mechanical Keyboard Guide, which was instrumental in my purchase decision. I’m thrilled that there are people who obsess over the feel and performance of their keyboards more than I do!

If you have migrated your WordPress blog from another blogging platform but the post slugs weren’t generated, you can my Generate Post Slugs Plugin to have the slugs generated from the post title.

Why I Wrote This Plugin

I wrote this plugin for use on this very blog because when I ported my custom blog software entries to WordPress, I didn’t bother to generate slugs with the import script I cobbled together. A few weeks ago I made my URLs SEO-friendly and realized that all those posts I imported years ago were missing slugs.

By downloading, you acknowledge that this plugin is released under the GPLv2 License AS IS with no implicit or explicit warranty of fitness for any purpose. While I have tested the plugin with WordPress 3.2.1 and have used it to fix the slugs for posts on this very site, it is STRONGLY SUGGESTED that you make a backup of your WordPress installation prior to using it.

Installation is just like any other WordPress plugin. On the plugin install page in your WordPress Dashboard, upload the zip file. Then activate the plugin under the Installed Plugins menu and follow the instructions provided there to use the plugin to generate your slugs.

I hope this helps someone.

The Fire has one thing that an iPad has never had: A comfortable price. I’m not the first person to posit this, but I think Amazon’s new Kindle Fire is going to be the first non-fruit tablet to succeed in the marketplace due the the “bang for the buck” factor. After playing with my Fire for a few hours now, I must say that I find the experience very enjoyable. Here’s a rundown of what I think up to this point:

The Bad
The Fire Compared to the iPad

The Fire and the iPad are kind of a like a boat and a car: A car and a boat are both get you from one place to another, but they are for totally different uses. The Fire isn’t a content creation device but its cloud-accessible content is second to none. The iPad is undoubtedly more powerful overall, but to some users (like myself) it’s debatable if the iPad is $300 more powerful. The Fire is much more portable and easier to deal with one-handed, while the iPad’s big screen wins for reading full-color material. In short: Which device is better depends on what you want out of your tablet.

I really like what I’ve seen out my Fire so far. For $200, you get a very smart, well-connected media player, with media meaning text, audio, video, and apps. If you like Amazon (which I do), you’ll love owning a Fire. Is it perfect? No. Is it mass-market friendly? You bet. If you’ve been putting off getting a tablet because of price, go ahead and get a Fire. There’s more than $200 worth of goodness in this simple, unassuming package.

Well, folks, I have my Kindle Fire in hand. So far, I think it is more than worth its $200 price tag. I’ll be posting more about it later tonight after I’ve had more time to take it for a spin.

One of the first things I wanted to know was could I load my upcoming web app on it to test (which I have discovered is called “side loading”). I tried connecting the Fire via USB to my computer and copying the APK that way, but that doesn’t work.

Not to be deterred, I did the following:

That was easy and now I can test my own app on my own device. I’m a happy early adopter!

A couple weeks ago, I alluded to an Android app I’m writing in conjunction with Mike Bryant. As requested by some friends wanting to know what the app does, it is meant to help web designers prototype color schemes quickly.  You set colors for various parts of a sample page and get to see an instant preview of what the colors will look like.  When you’re done, the app will email you the sample page (and more importantly) the CSS that creates the previewed color scheme.

Here’s a screenshot of the app in progress (codenamed WebIris) running on an Android 2.3 tablet emulator (which not-so-coincidentally is setup in a Kindle Fire configuration). 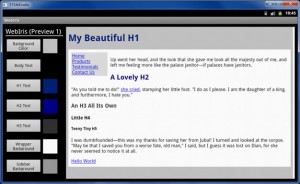 Remember, this is an early preview. Not all the bells and whistles are represented in this preview ;) We are targeting the app for Android 2.3 devices and beyond. Stay tuned!

I preordered a Kindle Fire a couple days after it was announced. At $200, I figure I couldn’t go wrong. Besides, Amazon has impressed me greatly with my e-ink Kindle: I’m sold on their ability to please.

One of the things that most excites me about getting a fire is that I can start developing an Android application. Sure, I could have been developing in an emulated environment, but I want to have a physical tablet to actually test my app on. The affordability of the Fire was the opportunity I’ve been waiting for.

Oddly, Amazon waited a bit before providing developers any details on the Fire’s development target. Earlier this month, they finally spilled the beans: The Fire is built on Android 2.3 Gingerbread (API Level 10). Since the Fire has stripped-down hardware, the use of the older API makes perfect sense. For the app I’m building, 2.3 provides more than enough functionality. If all goes well, I should be able to release my little app (more on that later) in a couple weeks.

While Steve Jobs’ death has been covered extensively by the media, I think it’s important that the world learn about the death of a man whose contribution to the information age is so immense that it is beyond measure. On October 12, 2011, Dennis Ritchie was found dead in his home at the age of 70. Ritchie is the inventor of the C programming language and a co-inventor of Unix, the father of all modern operating systems. The man was, without a doubt, brilliant. His contributions are what every nerd should aspire to.

Why is the C programming language so important? Because C was the perfect bridge between man and machine. Before C was invented, programmers had to write the code that runs operating systems (and most everything else) in assembly, which is just one step above binary. Assembly, while powerful, is also extremely cumbersome. Writing even the most trivial of programs is very time consuming. Ritchie’s C language put the development cycle of operating systems and applications into overdrive, allowing programmers to crank out innovation quickly and easily. On top of this speed and power, Ritchie gave his newly-minted language away for free to universities, who were free to do with it as they wished. C has since been used on nearly every system imaginable, from super computers, to PCs, to Macs, to video game consoles.

Nearly every programmable device in existence today owes its ability to be useful to Dennis Ritchie. Without his brilliance and willingness to give that brilliance away, we would still be in the dark ages of Information.

I just downloaded iTunes 10.5 and tried to install it on my Windows 7 64 bit machine. What I got was an error message that said:

There is a problem with this WIndows Installer package. A program required for this install to complete could not be run. Contact your support personnel or package vendor.

The fix that allowed 10.5 to install correctly was very simple. Simply go to Control Panel > Uninstall a Program. Right-click on “Apple Software Update” and choose “Repair.” After that, iTunes 10.5 (x64) should install with no problems at all. Apparently the Apple Updater can get messed up and cause the new version not to install. Imagine that.

If only all Windows errors were so easy to fix!