People like Paula Scher despise the classic font Helvetica, but to my untrained eyes, it is a fantastic font for clean headings. Unfortunately, the many variants of Helvetica are not free. Linotype and Adobe both have their implementations, but they cost around $25 per variant. That’s just too much to pay for a font. What to do?

Today, I was working on a project where Helvetica would have came in very handy, so I did a web search and came upon a FREE decent alternative released under the GPL by Red Had a few years ago called Liberation Sans, designed by Steve Matteson. Obviously, it’s not exactly like Helvetica, but it’s close enough to fool the average (read: non-typesetter) person. Besides, it looks a lot better than Microsoft’s ripoff Arial. Check out the sample below that shows all four variants that are available: 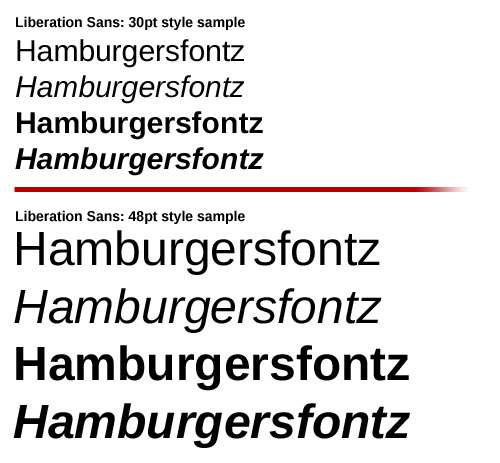 For me, this is an excellent find. Very importantly, it is released under the GPL so you can use it for anything you like, as long as you promise to allow others the rights to always use it too.

If you like Liberation Sans, click here to download it. Many thanks to Red Hat for allowing this great font to be freely used and distributed.