Some people have questioned exactly how Mike is planning on reducing the burden on the taxpayers while at the same time raising money necessary to balance the state budget. This is a perfectly valid question. Anybody trying to decide who to vote for should be asking this question. 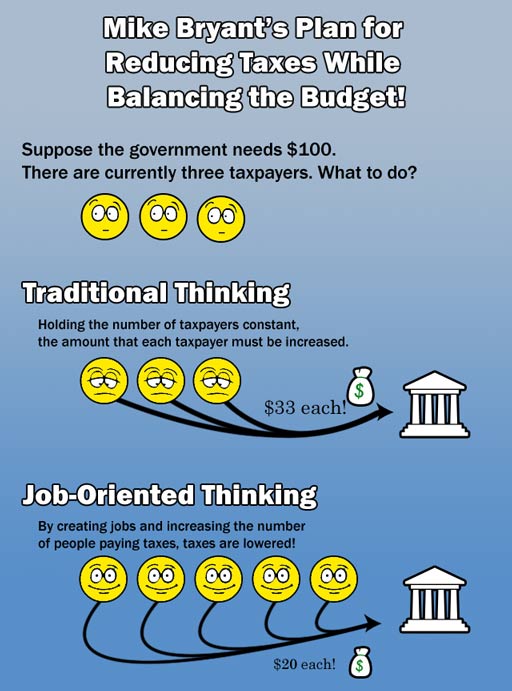 The best part of this is that Mike’s promise to bring jobs into KY is anything but lip service. As a private citizen, he has been working to bring jobs to the area since he left Atlanta to move back home. Despite his struggles to find steady work upon returning to the mountains, Mike continuously gave work to local people whenever possible. Whenever Mike benefited, so did those around him.

To scale his efforts to bring work to KY, Mike has several strategies that will certainly lead to employment opportunities for thousands of Kentuckians. Firstly, Mike will take measures to make KY, and especially Eastern KY, an Information Technology (IT) powerhouse. The low cost of living means that IT professionals living in the area can make a good living while providing their services at a cost significantly below the national average. What this means is that work that used to be done in Cincinnati or New York will be done in KY.

Secondly, Mike will travel far and wide to court any and all types of businesses who may have an interest in coming to KY. All companies willing to employ folks, both foreign and domestic, will be aggressively sought out. Over time, high school and college graduates will no longer have to leave home to find work: Instead, they can find a job close to home.

Thirdly, Mike will work to reform existing tax laws such that small and medium-sized businesses can more easily expand. Mike ran a small contracting business for awhile and he knows all too well that taxes severely limited his expansion potential. Businesses are no different than individuals. If there are more businesses paying taxes, each will have to give less to the government but the government will still have the same amount of money to perform its functions.

Mike’s strategies aren’t a magic bullet. They will take time. Perhaps more important to realize is that they will take hard work on the part of legislatures and citizens alike. However, the strategies are built on solid reasoning and are doable. One thing’s for sure, Mike’s not afraid of hard work, especially since helping eastern Kentucky prosper is one of his life-long dreams.